When the 2022 NBA draft happened almost a month ago, I thought to myself: do players picked earlier in the draft (i.e. higher-ranked) actually end up having better/longer careers?

If data wasn’t an issue, the way I would do it would be to look at players chosen in the draft lottery (top 60 picks) in the past 10/20 years. For each player, I would look at how many years he played in the NBA and see if there was a correlation between that and draft position. (Here, number of years in the NBA is a proxy for how successful an NBA career is. There are other possible ways to define success, e.g. minutes played, points scored.)

Unfortunately data is an issue, so I ended up looking at a related question: What are the draft positions of players currently in the NBA? If players picked earlier in the draft are more successful, than we would see more of such players in the mix. I had wanted to do this analysis for the season that just happened (2021-2022) but could not find the data, and so I’m doing this for the 2020-21 season.

I got the list of players that played in the 2020-21 season from Basketball Reference. I got the draft position of the players from Wyatt Walsh on Kaggle. (Walsh provides a lot more data than just draft position: it’s worth a look!)

The code below loads the draft data (file path will depend on where the datasets are saved on your machine). We only look at draft data from 2002 onwards as none of the players from earlier drafts were still playing in the 2020-21 season.

The next block gets the list of players for the 2020-21 season. We have to do some deduplication as players who play for multiple teams in the season have more than one row in the dataset.

Looks like there were 540 players who played in this season.

Cleaning and joining the data

The names of players weren’t consistent across the two datasets and so I had to do a bit of manual cleaning. The main inconsistency was for players with names that had accents on some letters. There were also a handful of differences due to suffixes and abbreviations.

There might be a better way to do this cleaning: I would love to hear if there are better alternatives! It’s also possible that I missed out some differences.

The first surprise I had was how many NBA players were undrafted:

145 out of 540 players, or almost 27% of players were undrafted! (It’s possible that the number is slightly smaller due to inadequate data cleaning on my part. If you spot any mistakes, let me know!)

The second surprise is how many drafted players are no longer playing in the NBA. The earliest drafted player in this dataset was in 2003 and the latest was in 2020, meaning that in this period,

players were drafted in total. Of these, only

Next, let’s make a plot of the number of players for each pick position. If the order of the draft means anything, we should see more players at higher pick positions (smaller numbers). That’s roughly what we see.

Let’s look at the same histogram, except where we aggregate the draft position into groups of 5.

There’s a clear trend: there are fewer players at larger draft numbers as one might expect. The trend is clearly decreasing until roughly pick 31 onwards, which corresponds to the second round of the draft.

Next, we have a scatterplot that shows the players who played in 2020-21 by their pick number and year drafted. There is no overplotting here (i.e. dots on top of each other) since there is exactly one player for each pick and year combination. 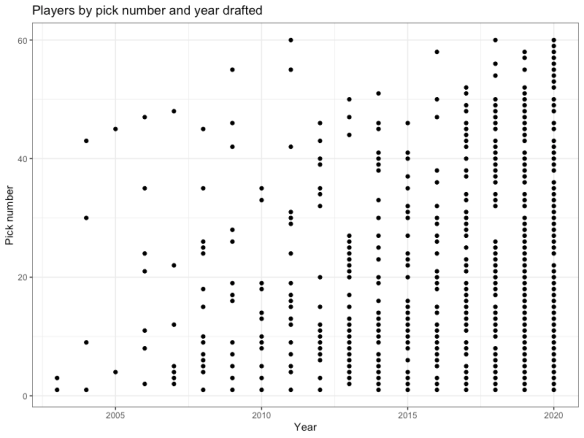 As one might expect, players drafted earlier who are still playing in the league tend to have been picked early in the draft.

The thing about static plots is that it’s a bit hard to probe the data further. For example, upon seeing this chart, I was really interested in knowing which player each point corresponded to, especially those in the top-left corner (drafted low but have lasted in the NBA). The plotly package makes it easy to do this by providing data on the point when hovering over it. Unfortunately I can’t insert the plot in WordPress, but if you run the code below on your machine, you can get information just like the screenshot below the code.