Assume you have a sample

. Our goal is to estimate the ratio of means

and provide a level-

confidence set for it, i.e. a set

. Fieller’s confidence sets are one way to do this. (The earliest reference to Fieller’s work is listed as Reference 1. The exposition here follows that in von Luxburg & Franz 2009 (Reference 2).)

Define the standard estimators for the means and covariances: 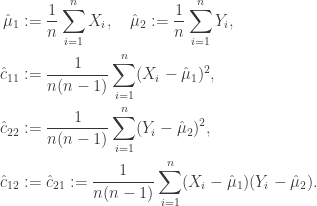 degrees of freedom. Compute the quantities

is defined as follows:

The following result is often known as Fieller’s theorem:

is jointly normal, then

is an exact confidence region of level

This is Theorem 3 of Reference 2, and there is a short proof of the result there. Of course, if

is not jointly normal (which is almost always the case), then Fieller’s confidence sets are no longer exact but approximate.

distribution needs to be chosen appropriately in this case.

I like the way Reference 2 explicitly lays out the 3 possibilities for the Fieller confidence set:

The first case corresponds to the setting where both

are close to 0: here, we can’t really conclude anything about the ratio. The second case corresponds to the setting where

is close to zero while

is a big constant while

is small. The final case corresponds to the setting where both quantities are not close to zero. The Wikipedia article for Fieller’s theorem describes the confidence set using a single formula. Even though all 3 cases above are contained within this formula, I found the formula a little misleading because on the surface it looks like the confidence set is always of the form

for some real numbers

In A/B testing, most of the metrics we work with fall into one of two categories: count metrics or ratio metrics. I think the naming convention can be a bit confusing; this post aims to clear up the confusion.

TLDR: I think the easiest way to distinguish between the two types of metrics is to compare the unit of analysis with the unit of randomization for the relevant A/B test.

denote variable that we are interested in (revenue or clicks in the example above). The count metric we want to estimate (i.e. the estimand) is

The most common way to estimate this is with the sample mean: take a random sample of randomization units (indexed by

For a given randomization unit, let

denote the variable we are interested in (revenue and clicks in the example above), and let

denote the number of units of analysis for this randomization unit (sessions and page views in the example above). The ratio metric we want to estimate is

The most common way to estimate this is to replace both the numerator and denominator with the respective sample means:

Some notes in closing

Assume that we are in the potential outcomes set-up in causal inference. We have a sample of

denotes the value of individual

‘s response if the individual is in the treatment group, while

denotes the value if the individual is in the control group. The fundamental problem of causal inference is that as the experimenter, we only ever get to observe one of

In causal inference, a common target that we want to estimate is the average treatment effect (ATE), defined as the expected difference in potential outcomes:

Ratio metrics: why we care

In some cases, we might be interested in a ratio of potential outcomes instead. This is not as unusual as one might think! We often hear claims such as “if you take this supplement, you will be x% stronger”: x can be expressed as

The work involved in estimating

is essentially the same as that in estimating

What is the target we are trying to estimate for a ratio metric? Instinctively, one might define the target as

This is incorrect! In statistical parlance, the quantity above is unidentifiable: even if we have infinite data from this model (i.e. we see an infinite number of observations), we still cannot estimate this target!

Let’s see this through an example. In this first set-up, imagine that there is no treatment effect, i.e.

for all individuals. Imagine also that

for half of the population, and

for half of the population and so

for half of the population and

for half of the population. However, if

What would I see if I were to run a huge randomized experiment? I would see EXACTLY the same data as that in the first set-up: 50% 1s and 50% 2s in the control group, and the same in the treatment group! We will not be able to differentiate between set-ups 1 and 2, even with infinite data, as the observed data will be the same.

(Notice that this problem does not arise for the ATE: both of these set-ups have the same ATE: 0.)

What we do instead

The target that practitioners use for ratio metrics is

If you run it through the two set-ups above, you will find that this target will have the same value in both settings: 1.

It took me a while to wrap my head around this. One takeaway I have is that the fundamental problem of causal inference forces us to think hard about what quantities we can even hope to estimate. This is why I think the issue of identification comes up a lot more in causal inference than in the rest of statistics.

I want to end this post off by highlighting two other things to worry about when using ratio metrics:

All that to say: approach ratio metrics with care!

I’m a recent PhD graduate of Stanford’s Department of Statistics. To find out more about me, please visit my website!

Buy me a coffee!

Do Not Sell My Personal Information