. BFGS is a popular quasi-Newton method. At each iteration, we take the following steps:

The issue with BFGS is that we have to maintain the

, which is too costly when

is large. The main idea behind limited memory BFGS (L-BFGS) is that we don’t really need

: what we really want is

. If we can compute

implicitly by maintaining a few

vectors, then we never have to deal with an 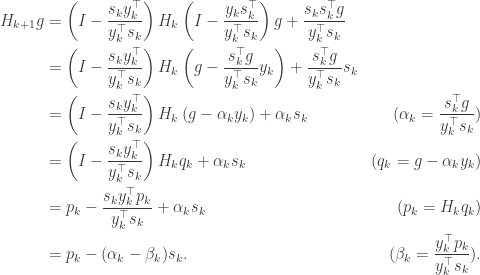 Thus, if we had an efficient way to compute

, we have an efficient way to compute

But we do have an efficient way to computing

above! By recursively unfolding Step 3, we get the quasi-Newton update for iteration

Limited memory BFGS goes one step further: instead of doing 2 loops of length

th iteration, do 2 loops of length

is usually set to 5 or 10. Here is the appropriately modified update:

A popular choice for