Assume we are in the supervised learning setting with

consists of the response

(See this previous post for more details of the components of a GLM.) The user gets to define the family of distributions

and the link function

is the parameter to be determined by maximum likelihood estimation.

For one-dimensional exponential families with the canonical link function, it is known that the log-likelihood of the GLM is globally concave in

can be found using methods such as gradient descent or coordinate descent. When non-canonical links are used, the GLM’s log-likelihood is no longer guaranteed to be concave in

. However, in some situations we can stilll show that the log-likelihood is concave in

. In this post, we show that the log-likelihood for probit regression is concave in

In the probit regression model,

is the cumulative distribution function (CDF) of the standard normal distribution. The responses are binary with

. The likelihood function is

and the log-likelihood function is

From here, we can show that

is concave by showing that its second derivative is negative:

can only take on the values of 0 and 1, we can consider those cases separately.

denote the probability density function of the standard normal distribution. Recall that 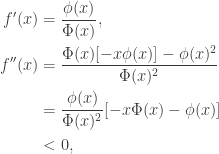 To show concavity of

, it remains to show that

. But this is true: see this previous post for a proof.