Let’s say that in our sample we have

individuals who truly belong to class 1 (call this group

individuals who truly belong to class 2 (call this group

). For each of these individuals, the binary classifier gives a probability of the individual belonging to class 1: denote the probabilities for

and the probabilities for

. The receiver operating characteristic (ROC) curve is a common way to summarize the quality of a binary classifier: it simply plots sensitivity vs. 1 – specificity. An ROC curve will always pass through the points

and should be above the diagonal

. The closer the curve gets to the point

, the better the binary classifier.

Area under the curve (AUC) is a way to summarize the entire ROC curve in a single number: it is simply the area under the ROC curve. An uninformative classifier will have an AUC of 0.5; the larger the AUC the better a classifier is thought to be. (One should really look at the full ROC as well to understand the classifier’s tradeoff between sensitivity and specificity.

and does not change the AUC.)

A key insight is that the area under an empirical ROC curve, when calculated by the trapezoidal rule, is equal to the Mann-Whitney two-sample statistic applied to

. We have a formula for computing this statistic:

It is an unbiased estimate of

, the probability that a randomly selected observation from the population represented by

Deriving an asymptotic distribution for AUCs

of them. For observation

‘s estimated probability that it belongs to class 1. Define

similarly for observations in

th empirical AUC is defined by

be the vector of the

be the vector of true AUCs. In order to do inference for the empirical AUCs we need to determine its probability distribution.

DeLong et al. (1988) note that the Mann-Whitney statistic is a generalized U-statistic, and hence the asymptotic theory developed for U-statistics applies. Let

be some fixed vector of coefficients. Then asymptotically

has the standard normal distribution 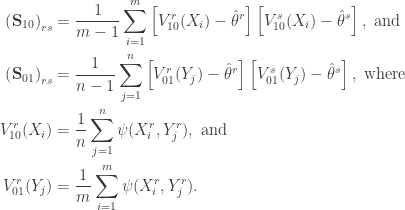 If we just want to compare two AUCs (to test if they are equal), we can set

in the above. The null hypothesis is

Under the null hypothesis, the asymptotic distribution of the quantity

Is the standard normal distribution. If the quantity is too large (in absolute value for a two-sided test), then we can reject the null hypothesis and conclude that there is a statistically significant difference between the two AUCs.