When I ask you to picture the vector

, most of you see this in your head:

To be precise, what you are picturing is the vector

in the standard basis for

represents a unit vector in the direction of the positive

represents a unit vector in the direction of the positive

, and we think of

as being the coordinates of this vector with respect to this basis.

Why this pedantry? We might, for example, want to express the vector above as a linear combination of different basis vectors, e.g.

Using the notation above, we have

The vector has coordinates

in this new basis.

Is there a way to get directly from the LHS to the RHS? The theorem below tells us how to:

be two bases for a given space. Let

matrix such that for any

expressed as a linear combination in 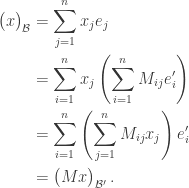 Let’s see this theorem in action for our example above. With respect to the standard coordinate system, we have

as we saw earlier.